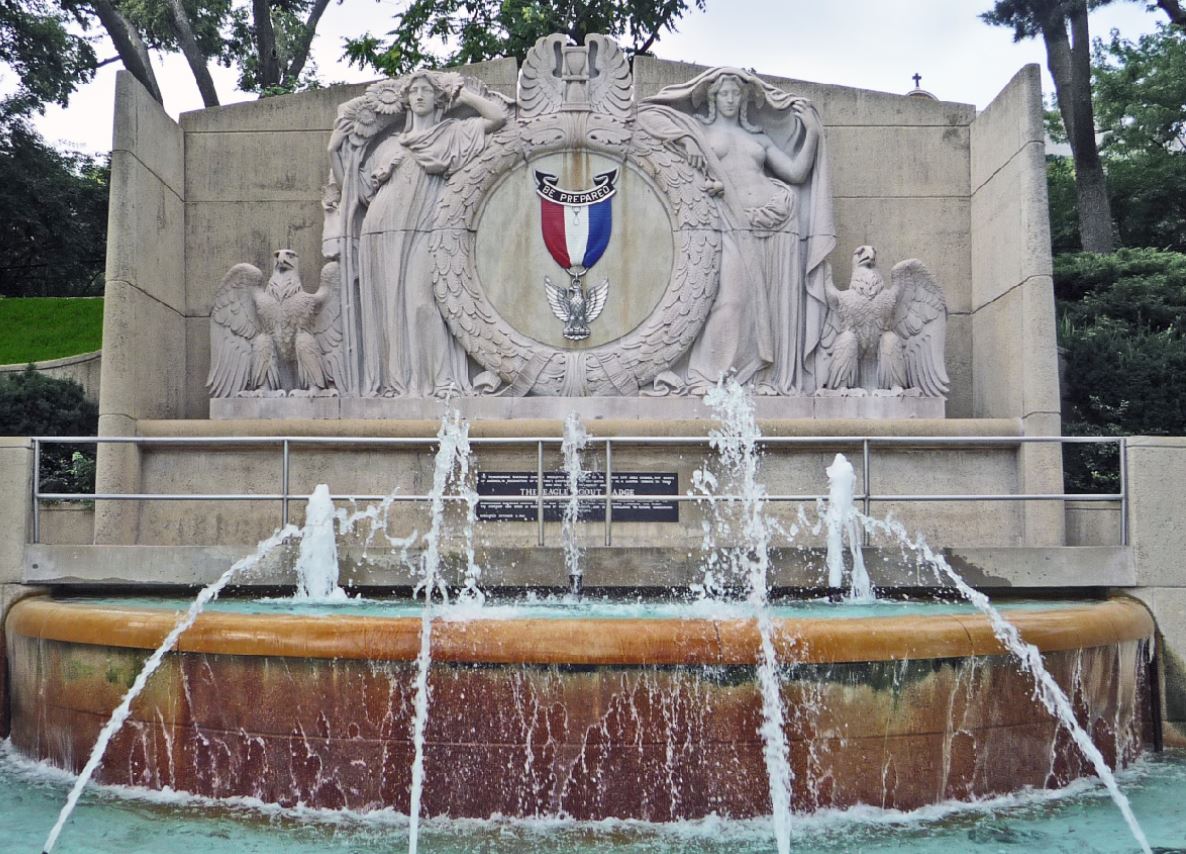 Believe it or not, Kansas City has a connection to the famous Madison Square Garden, the mega sports and event arena in New York City!

It all began in 1903 when the President of the Pennsylvania Railroad decided to design a railroad terminal in New York City.  Since railroad travel was the predominant long-distance mode of transportation in the early 1900s, he wanted to make a statement by mimicking the architecture of the Greek Revival theme, a popular trend in the 18th and 19th-century featuring symmetry, proportion, simplicity, and elegance of the ancient Greek temples of 5th century B.C.  The Pennsylvania Railroad Station, aka Penn Station, was a massive terminal that rested over 2 square city blocks in the heart of downtown New York City and over the years its doors welcomed thousands of visitors daily. 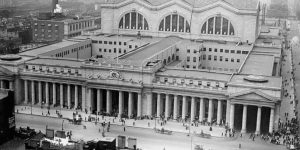 Eventually, with the decline of railway transportation in the 1960s, this prime piece of land was destined to become something else, so an agreement was made between the executives of the railroad and the developers of a new structure that would eventually take the place of the station…The Madison Square Garden!

In the early 1960s, New York had not enacted any type of legislation that would protect its landmarks, thus Penn Station and its structures became fair game for anyone who wanted to purchase remnants of the building before its contents were demolished.

Enter the Kansas City Boy Scouts of America.  Atop the entrance of Penn Station was a decorative sculpture that was centrally placed and comprised of two lifesize females flanking a huge 7-foot laurel wreath containing a working clock in the center.  When news of the demolition hit Kansas City (it made the national news), John Starr, then president of the Boy Scouts of America Regional Council, decided that indeed there was a sculpture that could be salvaged – that clock! So after writing to the president of the Pennsylvania Railroad, asking that the sculpture be donated for the use of a memorial to scouting, the president not only agreed but also offered to transport the 62,000-pound sculpture as far as St. Louis.

Starr quickly set up an Eagle Scout Memorial Committee to help decide location, secure funds and develop a mission around the memorial.  The monument was to serve as a nationwide tribute to all members of scouting that had attained the level of Eagle Scout.  Ironically, Kansas City, at that time, had the highest number of Eagle Scouts inductees in the United States.  Through private donations for funds to build, a city of Kansas City parkland donation to host the fountain, and a committed mission to succeed, the Eagle Scout Memorial Fountain was dedicated in 1968 atop a hill at 39th Street & Gillham, a major intersection connecting 4 major thoroughfares in Kansas City.

The dramatic placement is one of the most dazzling in Kansas City.  Flanked by 2 winding staircases that bow out in opposite directions as they ascend the hill, the effect is simply stunning.  The Penn Station sculpture was slightly altered in that the original clock face was removed and replaced with a stunning metallic Eagle Scout badge with its tricolored ribbon and silver eagle.  The actual fountain elements are centered directly below the two female figures, flow into two concentric pools below, and then cascade down to the large basin located between the stairs on each side. 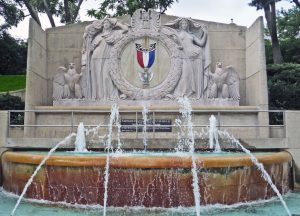 The design is perfect in its intent as the steep stairs to reach the fountain can be an allegory to the intent and stamina it takes to reach the level of Eagle Scout in the Boy Scouts of America.

So the next time you see the New York Nicks playing on TV, hear of a concert being given, or actually attend some sort of venue at the Madison Square Garden, you can rest assured that Kansas City holds a small piece of that pie!

Love this history lesson! Can’t wait to visit this fountain

Thank you Chris! Let’s get you scheduled soon!

Eagle scout since 1982 first I have heard of this. Would love to visit.

Congrats on a fine achievement Darren! You’ll have to check out that fountain, it’s gorgeous! 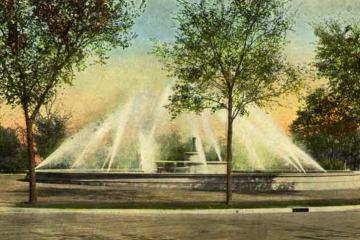 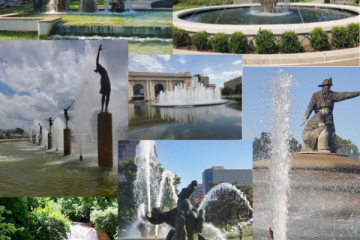 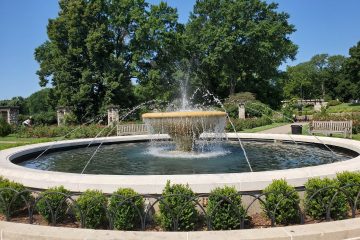